Client was charged with Assault Causes Bodily Injury, Family Violence- enhanced due to a prior conviction for Assault family violence. Police were called due to woman with a bloody nose crying in public. She told police that her husband hit her. Client pled to reduced misdemeanor offense and received 6 months in jail (two weeks short of time-served). 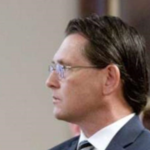 "The arc of the moral universe is long, but it bends toward justice."