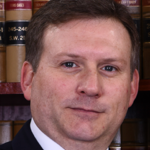 Darin was born in Mesquite, Texas, just outside of Dallas. He lived there until the 7th grade when his family moved to Spring. Darin excelled in soccer, playing on select clubs throughout high school.

After graduating from Klein High School in 1987, Darin attended Lee College (now, Lee University) in Cleveland, Tennessee, just outside of Chattanooga. While at Lee, Darin played on the soccer team, which qualified for the National Christian Collegiate Athletic Association tournament in his senior year. Darin was one of two players on the team to score a goal at the tournament and they finished fourth in the nation among Christian colleges and universities. In 1991, Darin graduated with a Bachelor of Science degree in Business Administration.

After spending several years in Houston working for his father's business of monitoring commercial loans for banks, Darin decided to attend law school. Although a dad to three sons, Darin was able to graduate from South Texas College of Law a semester early. He now has four adult sons and one step-son in High School.

After law school, Darin hung a shingle and had a solo practice until Tony Duckworth graduated a semester later. At that time, Tony turned down offers to join big firms in order to establish Duckworth & Ray, L.L.P. in 1998.

Get to know our Attorneys